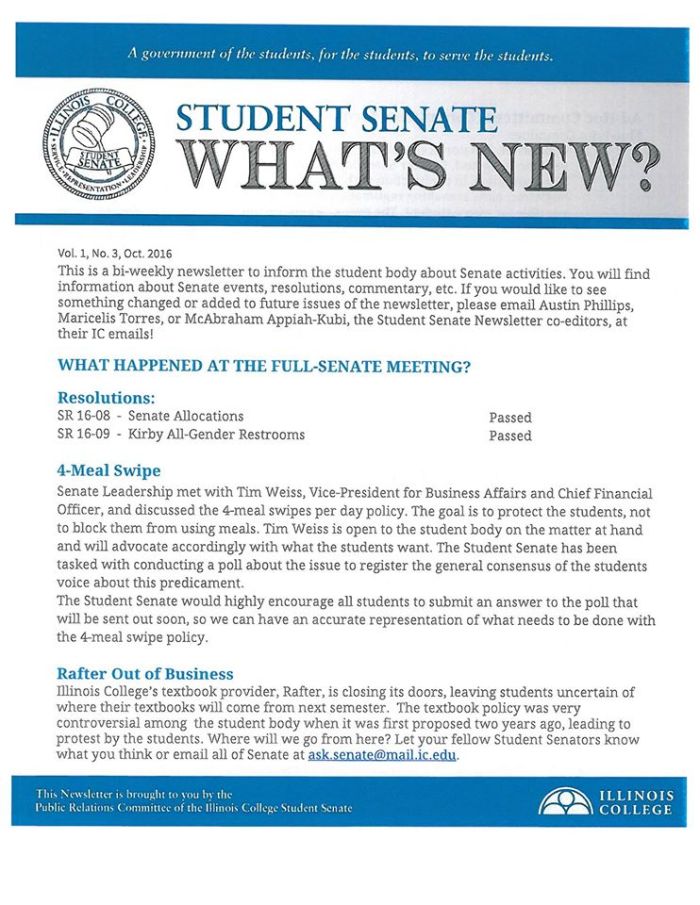 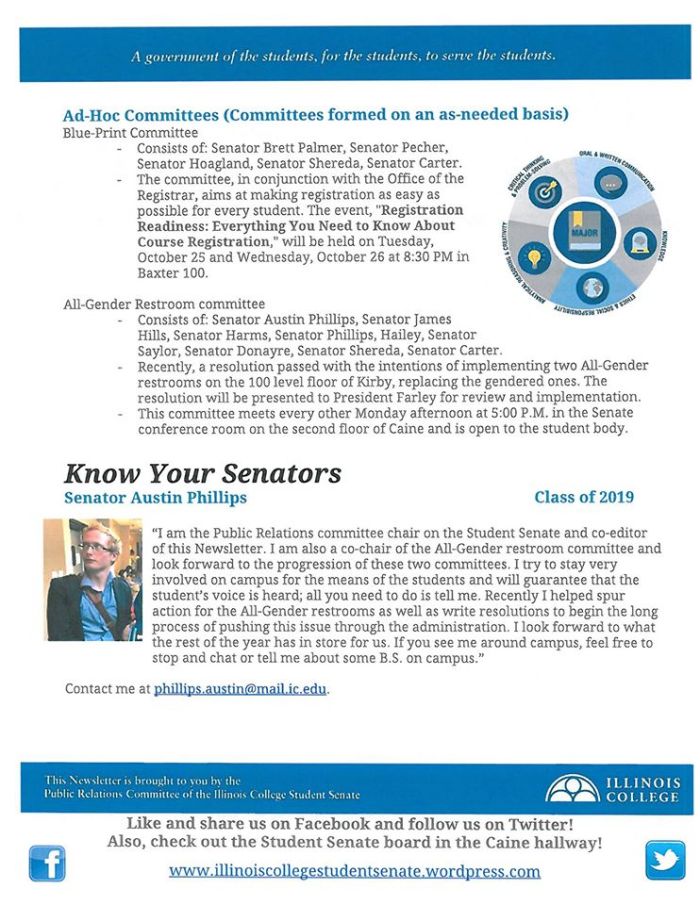 Attendance: everyone including, guest is Tim Weiss

President: Leadership meetings are being moved to Tuesdays at 4:30. The Newsletter needs to be added to the website. The furniture has been purchased for the Senate Conference Room and the furniture has come in for the new conference room.

Secretary: Senator Foster encourages senators to email her with questions if they have any.

Finance committee: Senator Hoagland has a resolution for several allocations.  Finance committee had a meeting on Wednesday morning and the committee members have been divided up to keep in contact with student organizations.

Special Events Committee: The Mike Stud event was on Tuesday. Senator Palmer is planning a BluePrint event on October 25 and 26 at 8:30pm in Baxter.  Senator Conway is starting to contact people on the 5k.  Sexual Assault Awareness Week is 7-11 so we will be decorating on the 6th.  Farley Forum is in the process it will probably happen in late October.

Public Relations: Senator Phillips, Austin had a boost post yesterday.  The post that was boosted was the Mike Stud concert, this was successful and PR will continue to use this feature.  Senator Phillips is working with Brooke Gronewold on the apparel.

2017: Senator Lenth has been trying to get the senior Senators to participate in the class gift

2019: Class of 2019 met yesterday and they are working on the Sophomore Experience.  The class of 2019 would like to have everybody on Senate to receive a name tag and have everyone wear the name tag on a specific day to get their name out there.

2020: Class met on Monday and the class will be meeting with President Wadkins to select a class chair and vice-chair.

BluePrint: The BluePrint event will be October on October 25 and 26 in Baxter at 8:30pm. First-year senators will be required to attend.  Helen Kuhn will be there instructing the sessions.

All-Gender Bathrooms: Senator Phillips, Austin and Senator Hills have a resolution to present tonight. Once this committee has a set time it will be publicized and open to everyone.

Dean Carlson: Dean Carlson spent time with international students.  We have a bigger group than before so she encourages all senators to reach out to them.  Reminder to all senators to make sure you use the tax exempt card because senators will not be reimbursed for that. Dean Carlson discussed the Sustainable Foundations Committee.

Dr. Adams: Dr. Adams asks senators to keep her informed and she is willing to talk to faculty if senators would like her to.

SR 16-08 Senate Allocations.  Senator Hoagland wrote this resolution for CEA, CARE, BSU, Spectrum.  CEA would like to bring a speaker; the CARE initiative would like $8,000 for the year so he plans on giving them $500 for this semester; BSU is receiving $4,800 for this semester.  Spectrum is also requesting money and they are increasing their original allocation request.  $7,800 is the total amount being allocated in this resolution.

An ad hoc committee needs to be formed to send out applications for the integrity board.  Senator Donayre will chair this committee, Senator Phillips, Austin, Senator Torres, and Senator Appiah-kubi will be on the committee.

If any member of the campus community is uncomfortable in their current situation, the promises set forth by the Illinois College Vision Statement are no longer justifiable:

Illinois College will build an international reputation for inspiring achievement and empowering students to make a difference in the world.

If steps towards creating a more inclusive campus are not upheld, Illinois College will not be striving to achieve the fullest extent of “achievement” and “empower[ment]” for which the institution wants to be internationally known.

Current all-gender restrooms on the Illinois College campus are not adequate to provide for the needs of the non-binary community on campus. As a result, students are forced to use gendered restrooms with which they do not identify. The addition of all-gender restrooms, therefore, would be a great convenience to students and an overall benefit to the campus.

The addition of all-gender restrooms will contribute to the promotion of gender equality at Illinois College, and help to educate the campus community about diversity and inclusion even outside the classroom.

The presence of more all-gender restrooms on campus will serve as a valuable educational opportunity.  As modern culture evolves, the complexities of sex, gender, and the gender binary are becoming more and more prevalent through social and political discourse, the media, and everyday life.  Educating students on these complexities will effectively prepare them for the inevitable, important conversations they will be a part of in their post-graduate lives. It is the responsibility of Illinois College to adequately prepare its students for the “real world,” and it is evident that the “real world” will be full of gender-based discussion.  All-gender restrooms provide students with opportunities to learn firsthand about subjects such as bodies, gender and sexual politics, and the harmful restrictions of the patriarchal gender binary – regardless of whether or not those students choose to actively use the all-gender facilities.

In accordance with this resolution, Senators James Hills and Austin Phillips have met with major advocates, involving those in the College’s faculty, staff, and administration that support and endorse this resolution. This includes employees in facilities and the Vice-President of Enrollment Management and College Marketing to acquire an accurate description of past projects to increase the number of all-gender restrooms and how much the cost would be for this resolution.

In addition, students have reached out to individual Student Senators to express their concerns regarding the status quo of the restroom situation on the Illinois College campus.

THEREFORE BE IT RESOLVED:

Both the ‘men’ and ‘women’ Restrooms on the middle floor, the 100 level, of Kirby will be transitioned to All-Gender restrooms by implementing All-Gender Restroom signs. The amount of $300 was put aside for the purchasing of the signs. From that amount, the (2) signs will be purchased.

WHEREAS: The Finance Committee is responsible for overseeing the Student Activity Fund and distributing it to Student Organizations.

WHEREAS: The Finance Committee recommends the following allocations for the Fall Semester of the 2016-17 School Year.

THEREFORE BE IT RESOLVED: These allocations are to be made as of Friday September 16th, 2016.

RESOLVED: The Student Senate approves of the following allocations. 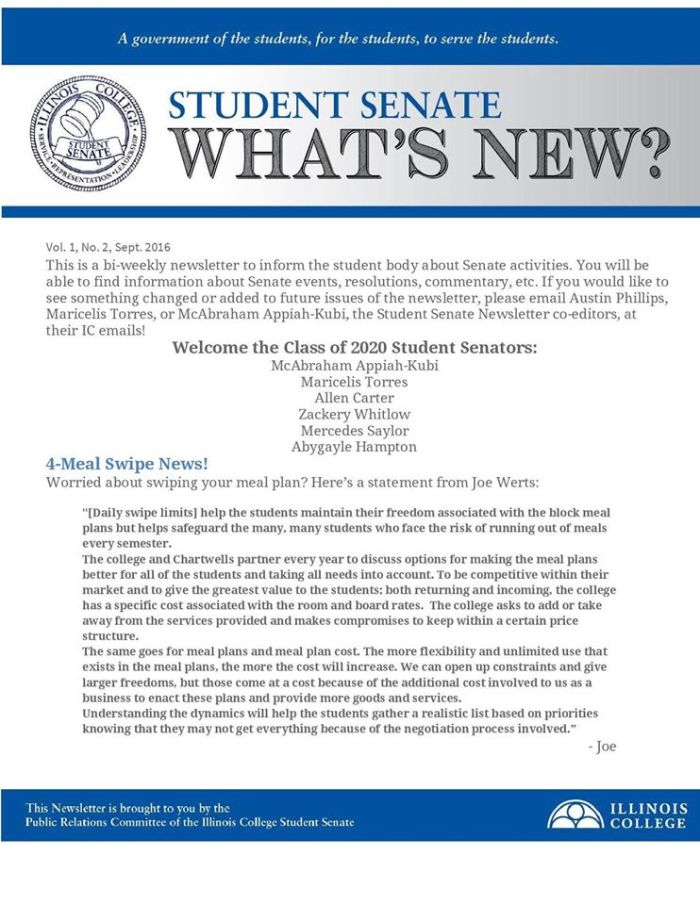 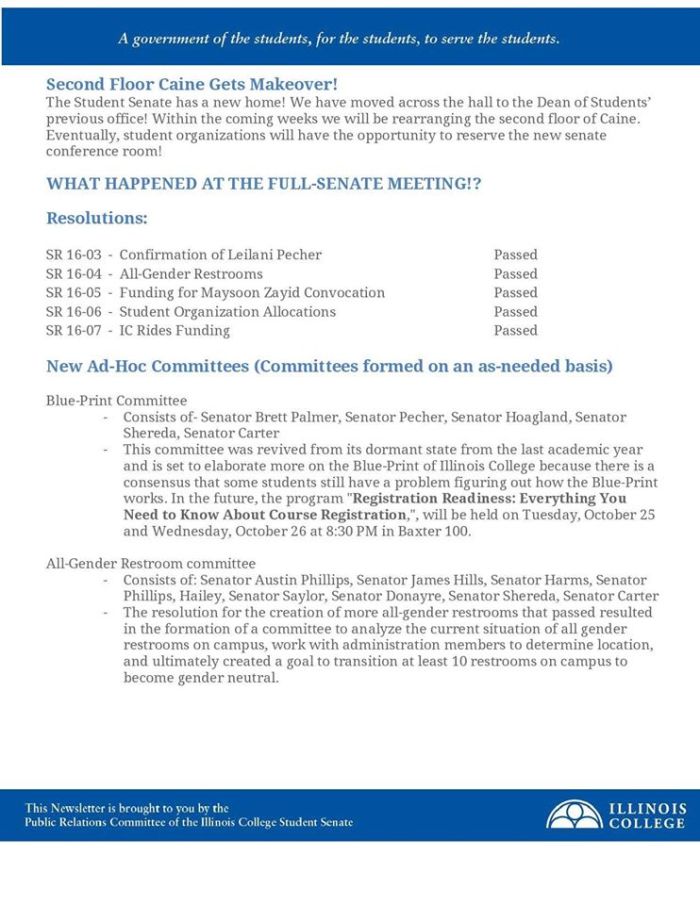 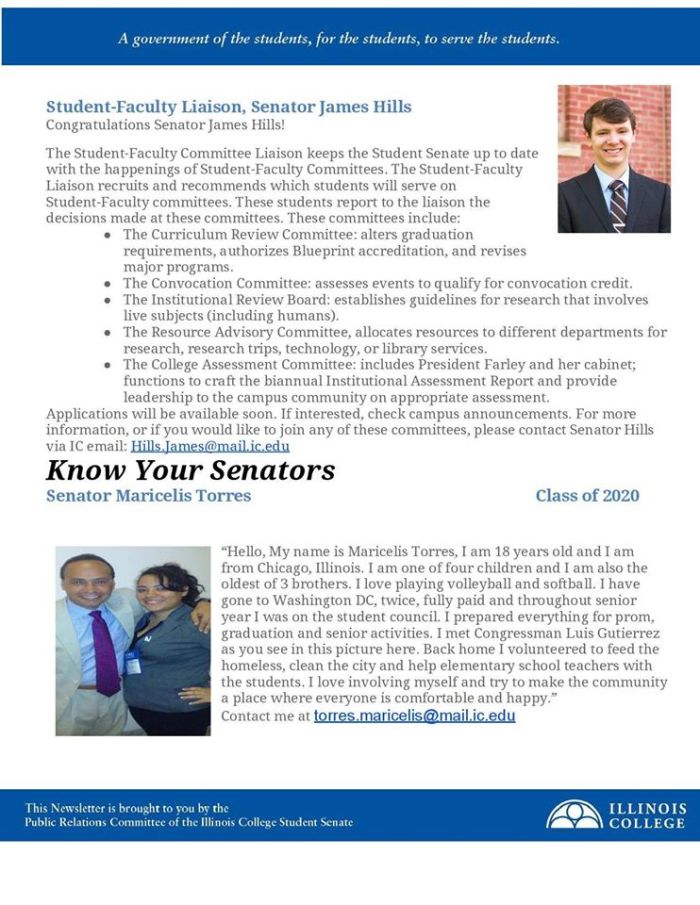 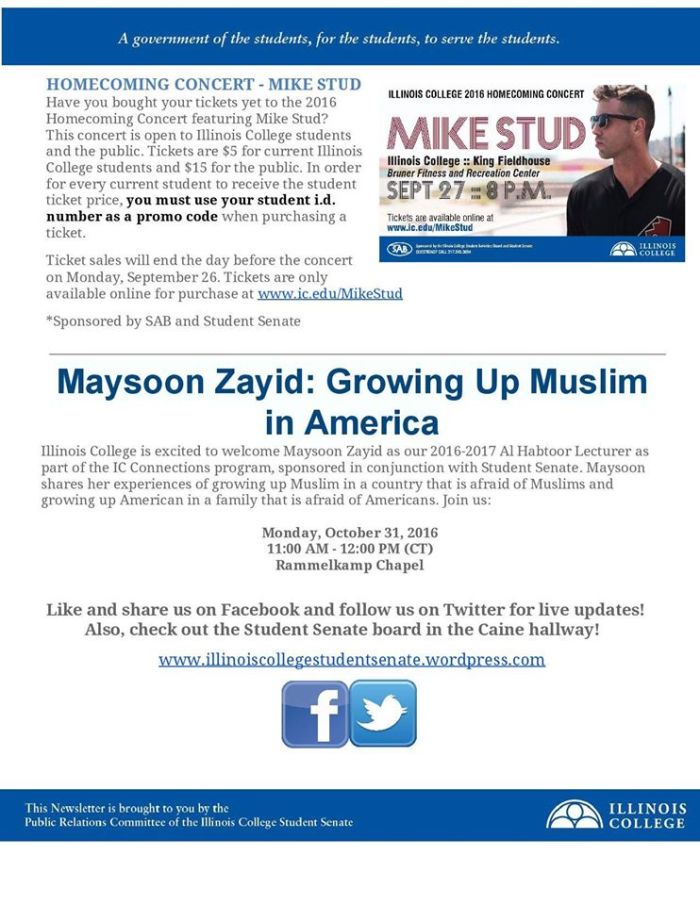 “Illinois College and Chartwells discussed how to better serve all students this year with their meal plans and implemented a four swipe limit to daily swipes for all students on block plans. This helps the students maintain their freedom associated with the block meal plans but helps safe guard the many, many students who face the risk of running out of meals every semester.
The college and Chartwells partner every year to discuss options for making the meal plans better for all of the students and taking all needs into account.
The first thing that needs to be understood is that Chartwells can do just about anything, but there are pricing scales and structures in place for every change made to meal plans and services. That’s how the negotiation is handled. To be competitive within their market and to give the greatest value to the students; both returning and incoming, the college has a specific cost associated with the room and board rates.  The college asks to add or take away from the services provided and makes compromises to keep within a certain price structure. Chartwells is willing to try new things and change just about anything to adjust to the students needs, but we have to stay within the constraints of our business to ensure our success.
For example, two years ago, we had two venues open for breakfast and lunch, and three for dinner. We had errors in the efficient use of scheduling because of how the students were using our services, so we changed. We traded breakfast and dinner at Mondo’s for lunch at the grill. This reduced lines and we were able to swap hours so we did not have to increase rates to do it.
This year, we pulled hours from the dining room in the afternoon when no one was here, and we were able to open Starbucks for late night service, again without increasing rates.
These are two example of compromise to better serve the students.
The same goes for meal plans and meal plan cost. The more flexibility and unlimited use that exists in the meal plans, the more the cost will increase. We can open up constraints and give larger freedoms, but those come at a cost because of the additional cost involved to us as a business to enact these plans and provide more goods and services.
My advice for students who want to get involved is to first understand the process and to understand both sides of the business arrangement. The more you understand about the process, the more impact you can have. Understanding the dynamics will help the students gather a realistic list based on priorities knowing that they may not get everything because of the negotiation process involved.
Please let me know if you have any further questions, or require any further explanation. Thanks so much for giving me this opportunity to explain our collective decision making process with the Senate.”
Joe Werts